Deeper insight in the events of the Nativity 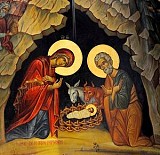 The events leading up to and which happened at the cave of Bethlehem at midnight on Christmas are the 'heart' of the Nativity events.  The other Biblical events  read one after another at Christmas actually happened over a longer time  frame  (i.e. the Presention was eight days later [commemorated on February 2],  the arrival of the Magi is placed anywhere from  10 days later  (January 6/Epiphany) up to two years, the slaughter of the Holy Innocents shortly after Epiphany or up to two years later followed by the Flight to Egypt).  Using commentary is from the Orthodox Study Bible we examine what happened at the first Nativity.

Luke 2:1  And it came to pass in those days that a decree went out from Caesar Augustus that all the world should be registered. 2 This census first took place while Quirinius was governing Syria. 3 So all went to be registered, everyone to his own city.

4 Joseph also went up from Galilee, out of the city of Nazareth, into Judea, to the city of David, which is called Bethlehem, because he was of the house and lineage of David, 5 to be registered with Mary, his betrothed [a]wife, who was with child. 6 So it was, that while they were there, the days were completed for her to be delivered. 7 And she brought forth her firstborn Son, and wrapped Him in swaddling cloths, and laid Him in a [b]manger, because there was no room for them in the inn.

Commentary:   God uses earthly rulers to accomplish His will. This census enabled Christ to be born in Bethlehem, fulfilling the prophecy of Micah (Mic 5:1). In the hymn by St. Cassiane sung at Vespers of the Lord’s Nativity, Augustus ruling as the only emperor over many scattered cities is an icon of our one Lord gathering the scattered pagans of the world. Christ being registered in the fallen world enables the faithful to be registered in the name of God.

Matthew 1:18   Now the birth of Jesus Christ was as follows: After His mother Mary was betrothed to Joseph, before they came together, she was found with child of the Holy Spirit. 19 Then Joseph her husband, being [f]a just man, and not wanting to make her a public example, was minded to put her away secretly. 20 But while he thought about these things, behold, an angel of the Lord appeared to him in a dream, saying, “Joseph, son of David, do not be afraid to take to you Mary your wife, for that which is [g]conceived in her is of the Holy Spirit. 21 And she will bring forth a Son, and you shall call His name Jesus, for He will save His people from their sins.”

22 So all this was done that it might be fulfilled which was spoken by the Lord through the prophet, saying: 23 “Behold, the virgin shall be with child, and bear a Son, and they shall call His name Immanuel,” which is translated, “God with us.”

24 Then Joseph, being aroused from sleep, did as the angel of the Lord commanded him and took to him his wife, 25 and did not know her till she had brought forth her[j] firstborn Son. And he called His name Jesus.

Commentary:  The righteousness of Joseph consisted of a mercy that transcends the Law (Hos 6:6). Joseph showed this mercy by his unwillingness to expose Mary’s supposed sin, even though he was obliged by the Law to do so. Her husband: The Bible calls engaged couples husband and wife before their marriage (Rachel was called the wife of Jacob before marriage by virtue of their engagement in Gn 29:21; see also Dt 22:23, 24). Thus, Joseph is called the husband of Mary, and Mary is called his wife (vv. 20, 24). In the Church, Joseph is remembered as the Betrothed, pointing out Mary’s ever-virginity.   An angel (or “messenger”) of the Lord dispels Joseph’s false reasoning by announcing the utterly unreasonable:

The conception of Jesus fulfills Isaiah 7:14, where we are told that a virgin would conceive and bear a Son. He who is conceived in Mary is not a new Person coming into existence but the eternal Son of God now using her womb as His throne. Both the virginal conception by means of the Holy Spirit and the name Immanuel, God with us declare Christ’s divinity.  The use of the word till does not imply that Joseph had marital relations with Mary after the Savior’s birth. In the Bible, this word (sometimes translated “to”) is often used to express a situation that actually continues after the event mentioned (see 28:20; Gn 8:7; Dt 34:6; 2Kg 6:23). The witness of the entire Church throughout history is that Mary remained a virgin for life.

Luke 2:8   Now there were in the same country shepherds living out in the fields, keeping watch over their flock by night. 9 And [c]behold, an angel of the Lord stood before them, and the glory of the Lord shone around them, and they were greatly afraid. 10 Then the angel said to them, “Do not be afraid, for behold, I bring you good tidings of great joy which will be to all people. 11 For there is born to you this day in the city of David a Savior, who is Christ the Lord. 12 And this will be the sign to you: You will find a Babe wrapped in swaddling cloths, lying in a manger.”

13 And suddenly there was with the angel a multitude of the heavenly host praising God and saying:

14 “Glory to God in the highest, And on earth peace, goodwil toward men!”

15 So it was, when the angels had gone away from them into heaven, that the shepherds said to one another, “Let us now go to Bethlehem and see this thing that has come to pass, which the Lord has made known to us.” 16 And they came with haste and found Mary and Joseph, and the Babe lying in a manger. 17 Now when they had seen Him, they made widely known the saying which was told them concerning this Child. 18 And all those who heard it marveled at those things which were told them by the shepherds. 19 But Mary kept all these things and pondered them in her heart. 20 Then the shepherds returned, glorifying and praising God for all the things that they had heard and seen, as it was told them.

Commentary:   The term firstborn does not imply Mary had additional children, but only that no child was born before Jesus. The firstborn son is traditionally the primary heir and recipient of blessings. Christ is the firstborn over all creation, and thus the firstborn from the dead (Col 1:15, 18). In Orthodox icons of the Nativity, Christ’s swaddling cloths are depicted as burial wrappings, affirming that one purpose of His coming was to endure death. The manger, or feed trough, would have been in a cave where animals were kept, thus fulfilling the prophecy of Isaiah: “The ox knows its owner and the donkey its master’s crib” (Is 1:3).

Shepherds are chosen to hear the first announcement of the Nativity, as they are symbols of Christ the Good Shepherd (Jn 10:11). Unlike the Pharisees, the shepherds were without guile and had simple faith. 2:13, 14 The message of the first angel is confirmed by the multitude, fulfilling the Law in which every word is established with two or three witnesses (Dt 19:15). Christ Himself is our peace who has come to earth; in Him, man is no longer estranged from God (see Eph 2:14–16). 2:17–20 The shepherds are also images of the bishops and presbyters of the Church, who proclaim Christ to the world. St. Ambrose writes that Mary’s own faith was strengthened by the news from the shepherds, and he asks, “If Mary herself learns from the shepherds, why do so many refuse to learn from the presbyters of the Church?”