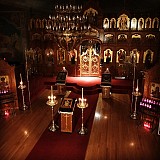 This is a shortened version of an article which appeared in orthochristian.com.   The full article is at this link.

The most correct conduct with enemies is to not have any enemies at all. The first stage of achieving peace with those who offend you is to avoid situations where people become offenders. Enmity between people is most often caused by sin. Therefore, we must be attentive to ourselves, analyze our behavior, and not fall into emotionalism. If you feel an increase in tension in your relations with someone, in those moments try to be quieter, remain silent, be patient, and if possible, try to simply take a break from communication.

Second stage: In having a conflict, don’t let it get personal

It should be noted that even the Lord Jesus Christ Himself had conflicts with people. At times it’s impossible to live on earth without conflict, preserving your views and beliefs and your soul. Sometimes there really are situations when we must openly stand for the truth, not fearing to confront evil.

But it’s necessary to separate the person from his actions and resist not the person, but his wrong actions. Condemn sin, but not the sinner. Sin itself does not need justification; it’s even dangerous: If we stop condemning sin, we could lose the understanding of the boundary between truth and falsehood.  Non-condemnation has nothing to do with appeasement.

Third stage: Give the offender over to God

Then the conflict exhausts itself and a fracture appears in your relations with the person—an offense. We have a burning desire for revenge, whether overtly or covertly. At this stage, it’s more correct not to seek such opportunities, not to advocate “for justice”—but to entirely give your offender over into the hands of God. If he is worthy of punishment, let God punish him...Seeing as we ourselves are powerless to admonish our offender, we may well ask God to instruct him (not just pain and torment in retaliation!), and the Lord Himself will govern whatever is better, more beneficial, and more intelligible for him.

There is a common misconception: If relations have not been restored after a conflict, it means the people did not forgive one another. But that’s not exactly true.

A man can’t change and become someone else overnight. But we’re not required to continue the relationship with someone who offends us to no end. We mustn’t hold evil and offense against him within ourselves—but to drag out a friendship or other close relations is not necessary, and even harmful.... Therefore, there is no need to forcefully make “friends” with someone who continually offends us. Forgive and walk away...even when we’re not in a state to forgive personally, we should ask God’s forgiveness for the one who offended us. That is the best and highest on the path of forgiveness—when we sincerely want the Lord to be merciful to those who have offended us.

Fifth stage: If your anger does not pass, forget about your enemy

Sometimes time passes and we simply can’t forget our pain and forgive our offender. Our enmity has become chronic. At this stage, it’s most correct to try to sincerely forget your enemy—stop thinking about him...The ability to forgive is not just given—we must develop it within ourselves...

We must understand that the evil a man does is not reflective of his entire essence. And the most important skill is the ability to see something good in everyone. After all, that is how God forgives us—behind our multitude of sins, he sees a good beginning in everyone.

Sixth stage: Pray for our enemies

The next stage of deliverance from the sin of enmity is prayer. Of course, it should also be present at all the previous stages. At the first stage we pray to God, asking Him to protect us from evil. And during the conflict it would be good not to answer the other person irascibly, but with prayer in the heart. However, in the previous stages, prayer is a means, but at this stage it becomes the goal. It is precisely prayer for people that is the greatest good, the most important way we can manifest love.

In fact, it is difficult to forgive sincerely. We must recognize this in ourselves and stop tormenting and abusing our souls, demanding from them that which is unbearable. But a prayer for someone, where we wish him peace despite our “I don’t want to, I can’t forgive,” is within our capabilities...

Seventh stage: Turn away from evil and do good

This may come as a surprise, but an enemy is in need of our good deeds even more than a friend. Of course, we must help our friends, we must support them … but our friends love us. If we lend to those from whom we expect something in return, what gratitude is there in that?

Doing good for our enemies has great significance both for our own souls and for relations with our offender. Such behavior from us could serve as an impetus for him to reconcile with us and forgive us. After all, enmity is a double-edged sword, and on its other side is the same person, the same offense that needs to be healed.