Elder Paisios (Eznepidis) of Mt. Athos is declared a saint just over 20 years from his falling asleep. 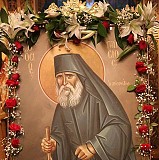 Elder Paisios is one of the most familiar modern elders due to the many books about him as well as well-organized collections of his teachings produced by the Monastery of St. John the Theologian in Sourti, Greece.  Here is a brief outline of his life:

~ Born  on July 25, 1924 and was deported a month after his birth along with most Greeks in Turkey

~ Served during World War II as a radio operator

~ Came to Mt. Athos in 1950 being tonsured four years later

~ Resided in Sinai for two years and then returned to Mt. Athos in 1964 serving at several communities

~ Beginning in 1964 during periods of illness he resided at the Monastery of St. John the Theologian in Sourti

~ Fell asleep on July 12, 1994.  Canonized by the Ecumenical Patriarch on January 13 of this year

Selection of Quotes on Various Subjects