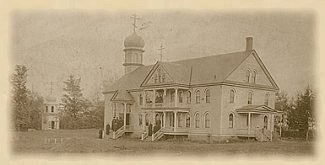 By the dawn of the 20th century, Orthodox Christianity had been established on the North American continent for well over a century. Monasticism being indispensable for the healthy nourishing of an Orthodox Church, it was inevitable from the beginnings of Orthodoxy in America that a time would come when this form of spiritual endeavor would come into bloom.

The idea of founding a monastery in America was primarily that of the young Hieromonk Arseny (Chagovtsev), the future Archbishop Arseny of Winnipeg. Father Arseny had arrived in America only in 1902, and was rector of St. John the Baptist parish in Mayfield, Pa. His thought was that part of the monastery's function would be to serve as a "mother house" for the monastics serving as clergy in the Orthodox North American mission. He felt that the monks doing this work needed a monastery in which to be "acclimatized" to the American situation and where they could return periodically for spiritual renewal. continue reading >

Founding of the Monastery >

Later History of the Monastery >